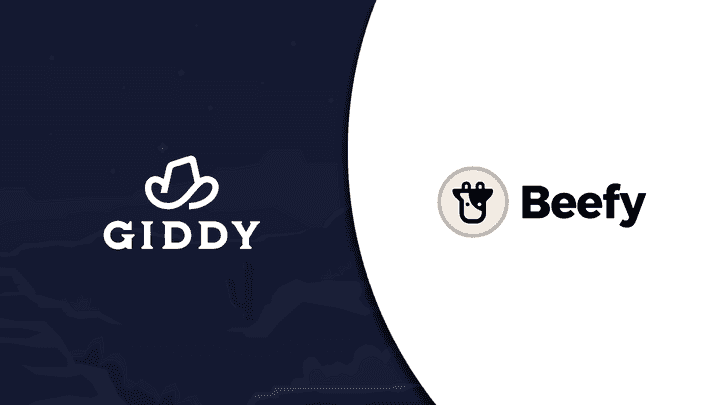 Giddy’s upcoming mobile app will guide its users in earning passive income with crypto assets. It aims to simplify the often complicated process into a single-tap staking experience. APY will be generated through DeFi opportunities, and Giddy users will manage the whole process through the app.

Giddy will also feature a multi-identity, self-custody private key security solution. This will allow its users to safely recover their private keys using a multi-factor MPC strategy, without ever having to create or manage a seed phrase.

Giddy’s unique spin on the staking model comes from creating an app anyone can use. DeFi has a reputation for only being accessible to power users, and Giddy wants to change this.

“We’re incredibly proud to collaborate with Giddy in bringing DeFi to a bigger user group than ever before” notes Weso, Beefy's Lead Developer and Strategic Partnership Coordinator.

“Everyone deserves the potential to earn yield in DeFi, and Giddy will provide just that.”

The collaboration begins by integrating both protocols into each other's DApps. Giddy will offer a BIFI staking option to farm GIDDY on their coin launch site with a limited-time boost in rewards for BIFI stakers.

Beefy now offers auto-compounding vaults for GIDDY and GIDDY-USDC, allowing users to maximize their GIDDY earnings. When the Giddy app is live, users will then be able to stake in the BIFI Maxi Vault on Polygon directly from Giddy’s app.

Beefy is a Decentralized, Multi-Chain Yield Optimizer platform that allows its users to earn compound interest on their crypto holdings.

The main product offered by Beefy is its 'Vaults' in which you stake your crypto tokens. The investment strategy tied to the specific vault will automatically increase your deposited token amount by compounding arbitrary yield farm reward tokens back into your initially deposited asset. Despite what the name 'Vault' suggests, your funds are never locked in any vault on Beefy: you can always withdraw at any moment in time.

Giddy is on a mission to make decentralized finance accessible to all. With Giddy, people can buy, hold, and earn rewards from their crypto assets in a safe and easy-to-use mobile application.

Giddy is the first of its kind to offer transfers between fiat and crypto, a non-custodial wallet with a fully-recoverable private key, and single-tap staking, all from a single app.

Founded in 2021 by entrepreneurs Eric and Ethan Parker, Giddy has raised over $8M in funding from investors. Learn more about crypto, DeFi, and Giddy at https://giddy.co/